Over the previous month, global markets have taken an absolute beating with broad drops across multiple sectors from commodities––led by oil––to equities. This week, even corporate bonds and US Treasuries have seen sell-offs. The magnitude of the drops have been substantial, with several markets seeing their largest single-day drops in decades.

In a field of losers, the strongest performers thus far have been gold and US Treasuries, and even those venerable safe havens have faltered somewhat over the course of this week. This all begs the question: What about Bitcoin? Bitcoin: the digital gold; the new safe haven; the most uncorrelated asset in the market––how is it performing during this global financial calamity?

The answer is … not good. At least, thus far. Over the course of 1 month, Bitcoin is down more than 40%, and almost 20% YTD. At its lowest point Friday morning, it was down 65% monthly and 50% YTD, although it has since recovered sharply.

While Bitcoin’s YTD numbers still compare favorably to equity markets, its volatility is much higher, and other performance metrics also show signs of veering off their previous paths in times of crisis. 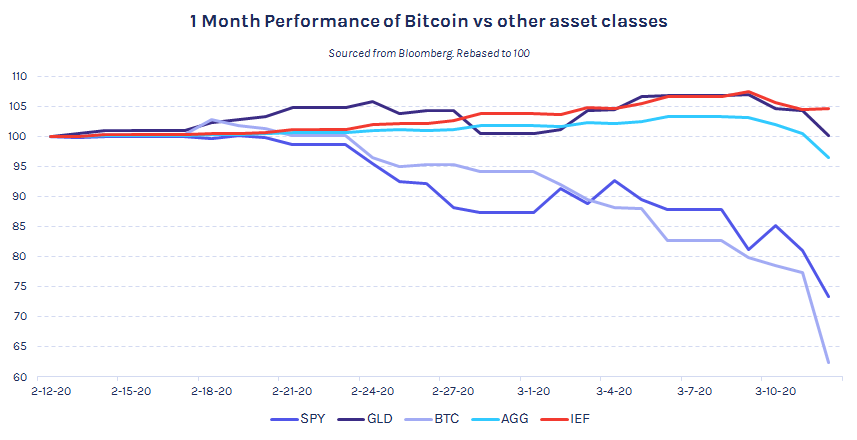 See the disclosure at the end of this piece for further information on the instruments analysed.

Up Until a Week Ago, Long/Short Ratios in Bitcoin Markets Were Extremely Unbalanced and Derivatives Open Interest Was Abnormally Large

Last week, data from Bitcoin exchange Bitfinex (source) and CFD provider IG (source) showed that long/short ratios on both these venues were highly unbalanced in favor of longs. At the same time data from SKEW showed that cumulative open interest on futures exchanges were near all-time-highs.

Over the last week, open interest has fallen by more than 50%. And in two days alone, SKEW data shows more than $850m Bitmex longs have been liquidated in a massive margin-call cascade.

Liquid Assets are First in Line to Cover Margin Calls

When markets drop and levered positions start running out of collateral, other levered positions––especially those that are correlated to the falling asset––are often not available to be sold off to free up new collateral as this would realise losses. Instead, traders will turn to uncorrelated assets, risk assets, or other previously winning positions as sources of capital to shore up dwindling margins.

We’ve seen this dynamic take place before between gold and equities. For example, in October 2008, during the steepest phase of the market crash, gold performed poorly and correlated much more closely than usual with equity markets. At the end of that month, both gold and the S&P 500 were down approximately 17%.

The Correlation Between Gold, Bitcoin and Equity Markets has Drastically Increased

There is an old adage in the asset management industry which points out, that in a crisis, all correlations tend towards 1. In a liquidity squeeze, a margin call cascade or a general flight to cash, everything is for sale, and everything liquid tends to get sold.

While many in the Bitcoin industry have been hailing Bitcoin as a new safe haven asset, at this point it seems clear that proponents of this status have probably gotten a bit ahead of themselves.

To be clear, this does not mean that Bitcoin is somehow forever barred from attaining such status, but it seems clear that this status has yet to be established.

That being said, other uncontroversial safe havens have also not fared particularly well during this market crisis. While gold initially did well, its recent performance has been rather poor, having come down more than 5% off its recent highs. On top of that, over the last month, the 30-day correlation of daily logarithmic returns between gold and the S&P 500 has flipped from -68% to 17%.

In such an environment it would be extraordinary for a relatively tiny asset like Bitcoin to retain its value while even the safest of assets are looking vulnerable.

The Jury is Still Out On How This Ends

Even though gold fumbled its way into the 2008 crash, when the dust finally settled, it emerged as a very clear winner. There are only so many holders of gold, or Bitcoin for that matter, whose positions are heavily intertwined with traditional markets. When these sellers run out, prices will likely stabilise while the calamity could continue in other markets as financial contagion takes proper hold.

Whilst we feel the effects of Bitcoin's volatility as keenly as many in the community, we are perhaps less surprised and certainly less pessimistic than many others. Many of us have been deeply involved in Bitcoin for the better part of a decade and we have seen such dramatic volatility several times before.

None of Bitcoin’s fundamentals have changed during this recent period. Bitcoin remains an independent, uninflatable monetary system whose units are unconfiscatable and not subject to bail-ins.

During this period of extraordinary market turbulence, we will continue our analysis to keep our investors as informed as possible and we remain as confident as ever in Bitcoin’s long-term value proposition.

SPX Index - The S&P 500 is a stock market index that measures the stock performance of 500 large companies listed on stock exchanges in the United States.

IEF ETF - The iShares 7-10 Year Treasury Bond ETF which tracks the investment results of an index composed of U.S. Treasury bonds with remaining maturities between seven and ten years.

This material has been prepared by CoinShares and its affiliates for research and informational purposes only and it is not intended to be relied upon as an offer or a recommendation, offer or solicitation to buy or sell a security. Nothing within this document constitutes (or should be construed as being) investment, legal, tax or other advice. This document should not be used as the basis for any investment decision(s) which a reader thereof may be considering. Past performance is not a reliable indicator of future performance. Any potential investor in cryptoassets, even if experienced and affluent, is strongly recommended to seek independent financial advice upon the merits of the same in the context of their own unique circumstances. Cryptoassets are a highly volatile asset class. Your capital is at risk. The value of crypto assets can go down as well as up and you can lose your entire investment. Cryptoassets are not covered by financial compensation schemes.

Predictions, opinions and other information are expressed at the date of publication and are subject to change as circumstances vary. This information has been developed internally and/or obtained from third party sources believed to be reliable; however, no representation or warranty, express or implied, is made as to the accuracy, reliability, or completeness of such information. To the extent permitted by law, we do not accept or assume any liability, responsibility or duty of care for any use of or reliance on this information.

The CoinShares Astronaut is a trademark and service mark of CoinShares (Holdings) Limited.

Why Bitcoin Miners Will Keep Mining